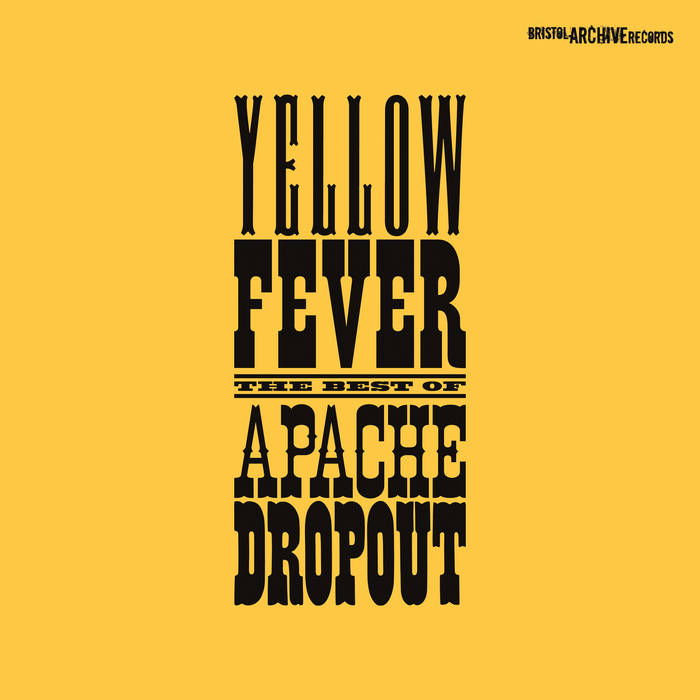 Apache Dropout played a massive part in the history of my record labels. They were the first band I released a record by when re-entering the dangerous world of rock n roll. 1985 was the year that Sugar Shack Records was created, 1990 was the year that it took its sabbatical – the very same year that Apache Dropout were formed. I heard the record in 1999 – fell in love with it and knew I just had to release it. Sugar Shack started again along with a sister label Bristol Archive Records, why?

One such person is Mike Crawford, a singer, a guitarist, saxophonist, songwriter, a player and to many in the late 70’s a man about town. Mike formed The Spics, The Viceroys and The Nitecaps and also had a solo deal in America, no way!

Surely it must have been an indie deal with a Bristol label – (that one was to come). Mike had a deal with Booker T Jones on an American label and recorded an album in the States – regrettably the label didn’t love it, so he was dropped. No doubt it was a depressing time for all as he returned from the USA to Bristol empty handed. This was 1989 the year that he met Rich Beale in a garden at a kid’s birthday party.
Rich was the guy who designed The Pop Groups first record sleeve, a creative genius, a brilliant singer, an artist and had just spilt from a Bristol supergroup – Head. Please check Head out if you can. They made three albums for Demon and Virgin Records between 1987 and 1989. They had Nick Sheppard (The Spics, The Cortinas and The Clash) and Gareth Sager (The Pop Group, Rip, Rig and Panic) in their line up. Why weren’t they huge? They fell through the cracks!

Apache Dropout were formed as a song writing duo. Mike and Rich wrote and recorded in Mike basement on a Porto studio. Mike played all the instruments on these early recordings with Rich supplying the lyrics and singing. ‘Dead Man’ was the first thing they ever recorded and can be heard on this compilation – it’s still stands the test of time.

They wrote brilliant songs, enough to record an album so what to do next, enter a recording studio? That was the normal route for people to take – not Mike. Mike was lucky enough to live in a large house in Montpelier. The house had a big kitchen but also a basement, could this be used as a studio? He brought a 24-track desk and an analogue 2” tape recorder into his house and so they set to work. Corin Dingly and Angelo Bruschini were asked to engineer the record. Corin later became ‘Alpha’ and Angelo (The Blue Aeroplanes and Massive Attack guitarist) – who would be in the band? Was this to be the next Bristol super group? It didn’t feel like that at the time but looking back through history – Apache Dropout were certainly full of Bristol’s finest.

With Rich as the charismatic front man and Mike as guitarist, they drafted in Marc Clements on lead guitar (The Untouchables), Jon Chilcott (RIP) on electric bass (The Crazy Trains, Vice Squad), Bob Lock on double bass (The Startled Insects now The Insects). Charlie Rose on keyboards and violin and James Ryan on drums (from Mike’s previous band) The Lost Weekend. Corin Dingly played percussion and Synth, Mathew added trumpet and Angelo and Alex Lee (Strangelove) some of the beautiful acoustic guitars. It truly was a stellar line up and so the recording process began.

The album took two weeks to record and was produced by the band – could they now secure a record deal? An initial mix was done at Coach House in Bristol, but no one was happy with it. Mike started the job of impressing record labels – The recently reactivated Postcard Records in Scotland, (Orange Juice, Josef K, Vic Goddard) showed early interest. So much so that the album was re-mixed in Glasgow by Kenny MacDonald of Altered Images fame. A deal with the now legendary Postcard Records was on the cards. The band were offered a support slot on the Edwin Collins (Orange Juice) UK tour. Surely Alan Horne would take the plunge? Talking to Mike about what happened is sad and reflects how the music industry works – the album was played to the press as a pre release to try and generate a buzz and no doubt secure rave reviews – the feedback that Post Card received was luke warm, not enough to make them invest and so they passed on the opportunity.

The band with several slightly different line ups continued until 1994 and then called it a day. Mike couldn’t get a deal for the record and Rich was getting itchy feet and had created a new project ‘Pregnant’.

And so, we jump forward to 1999 and my involvement. Mike Crawford became hugely influential in introducing me to or reacquainting me with bands from Bristol’s past. He started to talk to me about this long-lost record that had never seen the light of day by Apache Dropout. I fell in love with the record, the production was amazing, the songs brilliant, yes a little alt Country and with an acoustic feel at times but it had to be released – Sugar Shack (an indie Bristol label) would be resurrected and reborn.

I employed a PR company from London, got a label in Canada to work the record state side (Halogen Records) and Sugar Shack secured a distribution deal in the UK with Shellshock (we are still with them to this day). For the record to succeed we had to drop a single and yes, we were before the digital age, so it had to be a 7” vinyl – Galilee was manufactured. We secured some mainstream national press namely Mojo, NME and Record Collector ‘An English REM’ and ‘Classic British song writing very similar to Aztec Camera’.

Were the CD’s flying out – not yet!

What to do next for this record to succeed long term? I made an approach to an old friend in London, Jon Jo Key (The Various Artists, Love Train). JJ had changed style and instead of writing songs he was now ‘Omnivore’ a remix producer. He chose ‘Silence’ to remix first and we dropped a 12” single and employed a dance plugger again based in London. With ‘Silence’ being championed as a ‘breakbeat’ classic from various DJ sources with the likes of Ken Fan (Ministry of Sound), Groove Armada and Jason Holmes (Fat City) waxing lyrical about this slice of remixed pop, things surely must take off! Annie Nightingale (Radio One) confessed her love for the song ‘Oh God this is so gorgeous... it’s making me cry’. Apache Dropout were doing well!

Regrettably the sales just didn’t follow through and the album and singles didn’t get the breaks and success they deserved. Omnivore worked on another 12” project with the track ‘Washington’ but we never released it on vinyl.

The project and Apache Dropout were all over by the end of 2000 or so I thought…… roll the clock forward ten years and Mike and Rich decided to start writing together again and start recording another album. Gill Gillespie (ex Venue Magazine journalist takes up the story).

‘Masters’ is Rich Beale’s and Mike Crawford second studio album. As usual Apache Dropout have managed to get a hand from a whole host of famous Bristol music scene names. In fact, the album is co-produced and played on by Portishead main man Adrian Utley proving his remarkable aptitude for diversity yet again after his glittering studio work with The Horrors. Portishead’s lithe drummer Clive Deamer and Charlie Jones lately of Goldfrapp also pops in to provide bass.

The albums personality, its hypnotic moods and perversely unsettling themes however, are pure Apache Dropout.

One moment ‘Masters’ is crawling out of a fictional alt country saloon with a broken heart and a head full of bad medicine as on ‘You That I Want’. The next is sketching out cold, calculated bitterness in the shape of cruelly uplifting ‘Sing’. The songs are bittersweet, the lyrics literary often obscure but Beale never strays too far down a road that would make it a difficult listen. He is grounded in good old-fashioned eccentricity, psychedelia, country and pop.

And his extraordinary voice has never sounded better either. Beale is capable of switching from a deep, reassuring, Richard Hawley -like croon on weirdo ballad ‘Dead Cowboys’ to a raw Jagger/Thunders yell on the unmistakably Stonesy ‘Perfected’ and makes it sound easy. If Lou Reed could do country…………….

‘Masters’ is littered with originality but it’s stand out moment and its most obvious single is the breath-taking rock and roll foot stomper ‘Massachusetts. On the surface this is an irresistible sub-Modern Lovers anti-anthem, the sort of track that makes you stand up and start doing handclaps around the living room.

So, leaving Gill’s words and getting back to why we are releasing this ‘Best of’ release. In my humble opinion Apache Dropout should have been huge, they should have been global superstars, renowned for their song writing ability, filling stadiums with their beautiful sound. Without doubt one of Bristol’s best bands and best records but in truth………...

Apache Dropout fell through the cracks – enjoy them now on ‘Yellow Fever – The Best of Apache Dropout’. Peace.

All other tracks Copyright Control

Thanks to many but especially Reg Evans, Stew Jackson and Mike Darby.