by Fear of Darkness 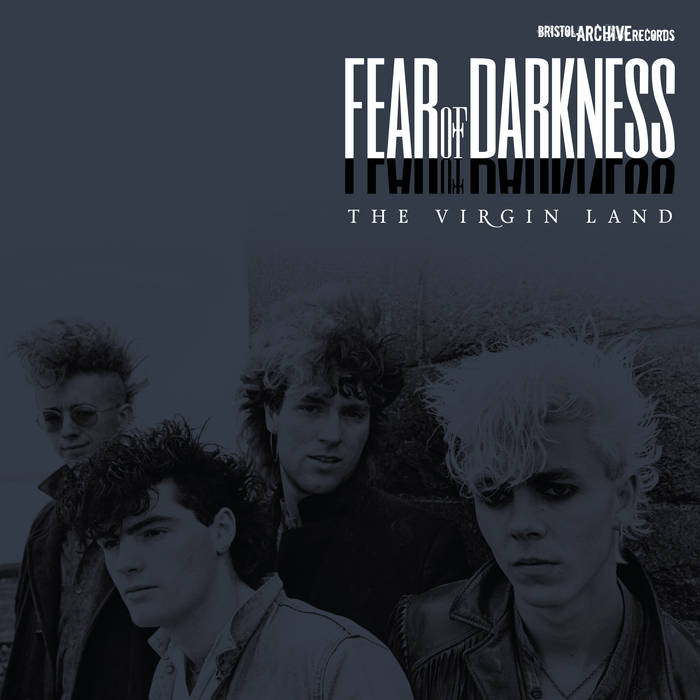 When you come from a small town, then as the song goes, the only thing you want to do is to get out. That certainly was the aim of Fear of Darkness. They tuned into their hearts, picked up guitars and drums and set about their business. ‘The Virgin Land’ is a punk-driven yell of rage from the mid-1980’s, turning into a healthy racket, all straight down frantically picked and plucked T-Rex rock and roll, merging into a maelstrom slalom ride of energy and expression of youth. The 18 tracks on this 17 song album – you get 2 versions of the band’s self-titled epic - pack a punch and have plenty to say.

‘All Fall Down’ sees FOD come over more as a Goth version of The Clash, with overtones of Gene Loves Jezebel and The Cult, very electric reaching out with thunderbolts of spaced-out, raise the roof guitar squalls and sonic boom boy grooves, taking in a James Bond homage en route: 007 and rising. It’s a feature that recurs. ‘After the Fire’ and ‘Keys of Time’ is filled all the light pours out of me, forceful, youthful, aggressive, questioning, impassioned, no playing dead, sometimes naïve but never less than enthusiastic energy. ‘Inside Your Heart’ oozes a more pop-rock sensibility, with a near crooning backing vocal. ‘Chains and Gates’ almost pre-dates the modern romantic gesture of putting locks on bridges, railings and gates.

Fear of Darkness was a band that could effortlessly translate their textured and spacious sound into a gig. Tracks like the live version of their eponymous tour de force show that off to thunderous effect. And they slay The Ruts classic ‘In A Rut’. The band’s attitude bristles from the opening salvos.

Sometimes the band over-stretched themselves, but it was always in the spirit of getting the maximum from what they had available. These 4 young lads from out in the sticks of Bristol made a good fist of trying to plug into a more anthem-driven, punch the air and raise the cell phones – or in these days of cigarette lighters - big crowd sensibility. They didn’t quite get to that level in the life of the band and their career, but it wasn’t for want of trying.

‘The Virgin Land’ is a worthy addition to the canon of 80’s alternative guitar albums. Check it out!

This compilation features all the recorded works by the original Fear of Darkness with Dave Mac on vocals.

They were signed to Heartbeat Records in 1984, a subsidiary of Riot City Records.

The band toured extensively in the UK picking up a large loyal following, having been likened to the Cult, New Model Army and the Alarm. In 1986 the band switched to Embryo Records and released The Virgin Land to critical acclaim in 1986.

This compilation features both the single and the eight track album together with various previously unreleased demos engineered and produced by Steve Street.

Engineered and Produced by Steve Street


Mastered by Steve Street Oct 2017
Recorded and Mixed at SAM Studios, Bristol and the Woolhall, Beckington between 1984 and 1986

Except track 5 and 18 recorded live at Birmingham Poly, May 1985

Photos by Beazer and Richard Wills
Thanks to Jim Reuter