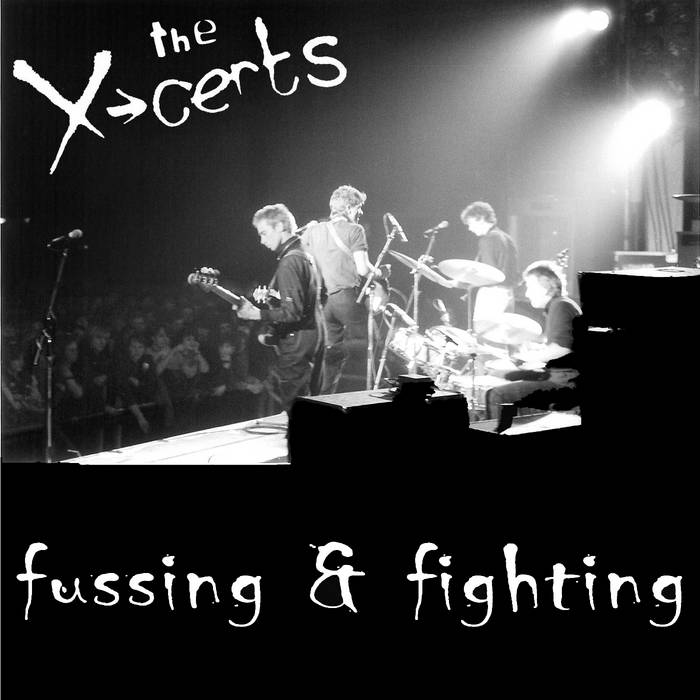 From the very beginning the band were politically motivated and early gigs were filled with songs detailing the frustrations of the time. The political stance of the songs earned the attentions of The Socialist Workers Party and organisations like Rock Against Racism, who invited the band to play at many functions (usually on the back of a lorry ending in a confrontation with the police). The association with R.A.R. helped to promote the band and a dedicated following started to form, some of whom would travel with the band to gigs, in the back of a hired Ford Transit van (sitting on an amplifier if they were lucky, being crushed under one if not!) It was mad, chaotic and full of energetic fun.
The early line up of The X-Certs recorded a number of tracks for Simon Edwards at Heartbeat Records and their first release was "Blue Movies" on the 4 Alternatives EP, shortly followed by "Anthem" on the wonderful Avon Calling compilation album. By 1979 The X-Certs had come a long way in a short time, a Manager was on board and the band were beginning to expand and experiment outside of the "punk" musical boundaries (including introducing a Reggae element into their set), but individual passions within the band were pulling in different directions and eventually Chris Bostock replaced Phil on Bass. With a new member, the band went through a period of intensive rehearsing and gigging, becoming a much tighter unit and with confidence, flexed their musical muscle, found their own sound/direction and started to consolidate their reputation as an important West Country band, especially on the live circuit.
The band became a popular opening act for visiting bands to Bristol and played with The Only Ones, The Angelic Upstarts, Pere Ubu, The Associates and The Buzzcocks, to name a few, but the pinnacle was undoubtedly when they were given the opportunity to open for The Clash during their 16 Tons Tour, at Sophia Gardens, Cardiff on 11 February 1980. The X-Certs arrived in their hired transit for their sound check, only to be told they would need to pay the Lighting Engineer £50.00 if they wanted any lights. A quick emptying of pockets and the money was scraped together, they took up their positions and the stage was illuminated with light. "You need to pay the Sound Engineer £50.00 to" came the sucker punch. Penniless and unable to pay, the biggest gig of their career so far was turning into a disaster an hour before the doors opened.
Nicky "Topper" Headon (The Clash's drummer) appeared to ask what was going on and when told, in true punk camaraderie, he muttered "Fuck that, I'll mix you meself!" So, with Topper's assistance, an hour later The X-Certs opened the gig; with The Clash watching the performance from the wings and 4500 in the audience dancing up and down, could it get any better?
Shortly after supporting The Clash, Simon was replaced by Kevin Mills on guitar and the band looked to forge ahead. It was 1980 and the new line up began to hone their musical sound and direction even further, introducing more reggae influenced tracks and becoming the tightest version of The X-Certs so far. The band continued to gig extensively, but this year also saw the them spending more time in the studio, perfecting recording skills (with the guidance of Steve Street) and preparing to take themselves onto a more mature musical level; the fun and spontaneity from the live sets wasn't lost though, and always ready to try something new for a different sound, the band experimented by recording the backing vocals for "Stop The Fussing And Fighting" in the Studio toilets! Early October saw the band in GBH Studios laying down a pre-recording demo, mid October they were in Crescent Studios, Bath, recording "Queen & Country" and "Visions Of Fate" for the Bristol Recorder 2 album and a few weeks later they were back at Crescent Studios recording their first single for Recreational Records, a self penned reggae number, "Together".
The tracks recorded in that period demonstrated they were now as comfortable in the studio as they were playing live and the even though there had been some changes along the way, the politically motivated passion and rawness was still there, bursting through. A headlining gig at Tiffany's, Clifton in November, the planned release of the single in January 1981 and it looked as if the doors to dreams were beginning to open, but by Christmas it was as good as over.
Bernie Rhodes had tempted some of the best musicians in Bristol away to professional contracts as Subway Sect and then later JoBoxers, this left The X-Certs without Chris on Bass. "Together" the single was released in January and received nightly airplay from John Peel, A-Side and B-Side Dub version. Kid Jensen gave it coverage on his Radio 1 tea time show too, but the band had hit a brick wall. Despite an extensive search for a replacement Bass player and a London gig promoting the single (with a stand in Bassist), the musical chemistry had been lost and the journey that started with such excitement in 1978, fizzled out in early 1981.

The recordings are from 1980 and come from the Crescent Studio sessions (for vinyl release), the GBH Studio pre-recording demo session 1980 and the Tiffany's, Clifton gig 1981.

All songs by C. Arnold except:
Secrets by S. Justice
Stop The Fussing And Fighting by Culture
Slow Down by L. Williams
Frustration by K. Mills

Earlier recordings by The X-Certs (the first line up) can be found on Heartbeat Records re-released Avon Calling album, including Blue Movies, Anthem and You Have been Warned.

This was a fantastic time to be involved in the Bristol music scene and hopefully this project will bring back happy memories for a lot of people.
Written by Clive Arnold

Copyright on the photographs rests with the original photographers and we thank them for their great works.