Joshua to Jashwha - (30 Years In The Wilderness) 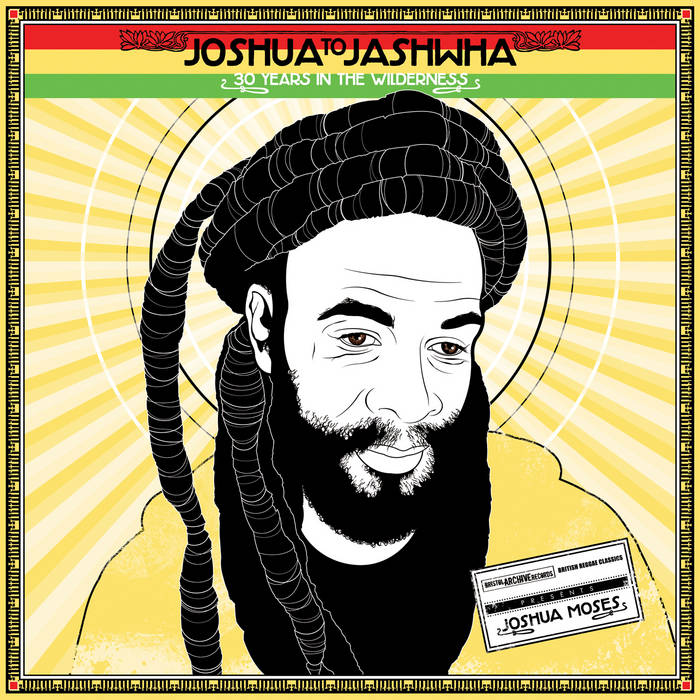 JOSHUA MOSES
’JOSHUA TO JASHWHA - 30 YEARS IN THE WILDERNESS’


From the beginning of Bristol Archive Records involvement in documenting Bristol's neglected reggae heritage we've wanted to release an album that showcases the great talent of one of the local reggae scene's mainstays, Joshua Moses.

Unfortunately, Joshua has no copies of the many recording sessions he has done in the years since his first session in 1978, and so it has taken more than eighteen months of painstaking research and the pursuit of numerous leads to gather together the fifteen tracks on “Joshua To Jashwha – 30 Years In The Wilderness”. The result is more than worth any effort involved on our part and is as strong a debut album as anyone could wish for, guaranteed to create a buzz among reggae fans worldwide.

The tracks on this album were recorded between 1978 and 2003 yet prior to Bristol Archive's involvement the only tracks to have been previously released were the very scarce “Africa (Is Our Land) and it's dub counterpart “Home”. The former, included on the “Bristol Reggae Explosion 1978-1983” and both tracks will be reissued on a very limited 12” in February 2012. The only other track to have previously seen the light of day is “Rise Up”, first heard on “The Bristol Reggae Explosion Volume 2”. Again we have included it's dub counterpart and again we are releasing a very limited edition 12” alongside “Africa (Is Our Land)” in February 2012.

The other 11 tracks were recorded over a period of twenty years and include a trio of live recordings, but all the tracks have one thing in common, they are all roots tunes of the highest order and Joshua being a multi talented musician has created the music with as much skill as the lyrics. Having dealt with repatriation with “Africa (Is Our Land)”, we move on to “House of Dread”. One of the highlights of Joshua's live shows in the early eighties, it welcomes all of humanity to embrace Rastafari in universal unity, although there is the caveat that the rich may not be welcome.

Evildoers come under attack in “Stick It Up” which attacks the hypocrites and parasites, (vampires and old pirates), who have caused so much suffering throughout history. We then move onto “Jah Time Has Come” that skilfully adapts Aswad’s “Promised Land” rhythm as Joshua looks forward to the coming of Jah and universal justice. Another candidate for the twelve inch treatment is “Suffering Is In the Past” and it's dub counterpart, a tale of life's struggles and overcoming suffering. This is followed by “Rise Up”, Joshua's call to fight oppression and injustice wherever it is found. “Steel” calls for love to triumph over evil. Joshua then proclaims his Rastafarian, Jamaican and African identity in “Bobby Wrong”. “Children Of the Light” and “Nothing To Lose” show Joshua's vocal versatility as he uses a falsetto voice, whilst “Protection” says that if you embrace Jah he will guide and protect you and show you the way. The final track “Distant Guns” introduces a bluesy guitar giving the song a unique and extremely catchy feel as Joshua sings how love will triumph over adversity come judgement day. All the tracks are sung with the utmost conviction, by an artist who truly believes what he sings.

It's likely that if Joshua had been recording in Kingston rather than Bristol he would have become an international star, his music avidly collected and lauded with praise. It may be rather belated, but this release should go a long way towards establishing Joshua's reputation internationally.

The other purpose of this release is to draw a line under Joshua Moses and see him reborn as Jashwha Moses, Jaswha has had many trials and tribulations over the decades and his lonely struggle for musical success has often been an uphill battle. Now with this career retrospective and a new name to tie in with his new, but equally spiritual material, he can hopefully look forward to the success and wider recognition his talents have always deserved.
www.bristolarchiverecords.com

All other tracks previously unreleased

Tracks 1 and 15 Engineered and Produced by Dennis Bovell

Tracks 7 and 8 Engineered and Produced by UK Scientist

All tracks mastered by Steve Street 2011

Thanks to:
Dennis Bovell, Martin Langford, Steve Street, Shoc Wave/Unitone Publishing/Bristol Underground Sounds, and all the musicians who played on these tracks, especially Mikey Taylor Hall.

• The Universal Forces that bind us all.
• Our Mother and Father, without whom we could not exist in this form
• Gene Walsh for his absolute belief
• Mike Darby for his insight of the bigger Picture
• And very special thanks to Beryl H of whom it can be said carries the soul of an angel - her support in all things musical, Dubwise or otherwise has been exemplary - Thank you

Photo credits:
Thanks to the original photographers and artwork designers whom copyright remains on their work including Paul Bartle-Jenkins.