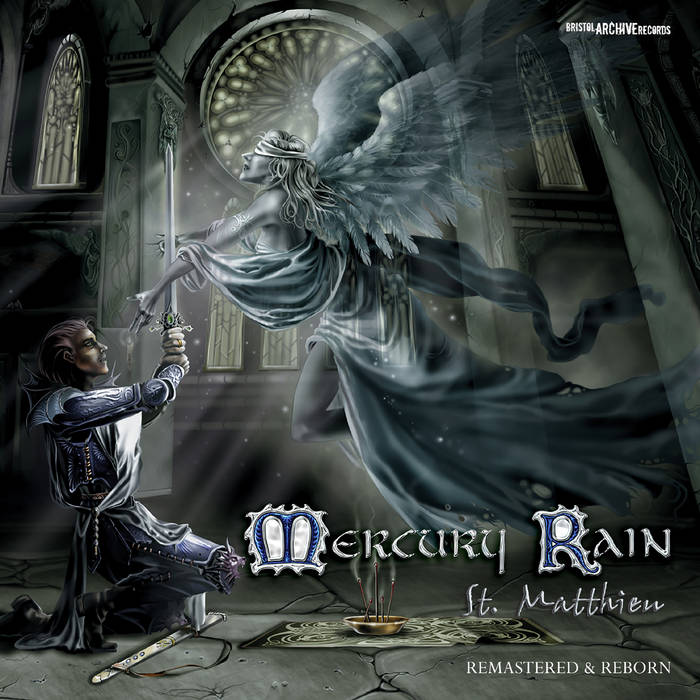 Formed in 1994 by young veterans of the Bristol music scene, Mercury Rain started life unpromisingly as three guys who ‘just wanted to play metal’. Ex-Crisis bassist Jon Hoare and bandmate and drummer Andy Pester had hooked up with guitarist Dion Smith, but Mercury Rain lacked both a singer and a direction until Sonia Porzier gave them both. Responding to a ‘vocalist wanted’ advert she brought to the band both a fabulous voice and a copy of Nightwish’s second album ‘Oceanborn’. At this time the metal female voices genre was still pretty much in its infancy, but Jon in particular was immediately attracted to the scene – the originality of the operatic vocals and symphonic soundscapes – and recognised its potential. Sonia’s arrival not only filled the void behind the mike stand but also set them on the path to being possibly the best-known British band of the genre.

Five songs had already been completed instrumentally so with Sonia signed up ‘Where Angels Fear’ was completed in November 2000. Although the band now see this as no more than a glorified demo, it’s an accomplished release, imbued with the spirit of the metal female voices genre. Instead of gigging, the band defaulted to writing mode, Jon working on the grounds that although ‘Where Angels Fear’ was a good place to start the band had better to offer. So with just one gig at Bristol’s Louisiana separating the releases the band unveiled ‘Dark Waters’. For their first full-length release Jon decided to pull the stops out, and the result was an album with swathes of orchestration, complex arrangements and a deep gothic vibe. With confidence at an all-time high he contacted the organisers of Bloodstock who were impressed enough to book Mercury Rain to open the main stage at the 2003 festival (ironically the night Nightwish headlined) making them the first band from the burgeoning new genre to play that event. To maintain the momentum, once they’d completed the tour of which Bloodstock had been the centrepiece Jon proposed that the band get back into the studio. The aim was simple: to better ‘Dark Waters’; and the result was stunning.

‘St Matthieu’ showcases the best of the genre. With its intro ‘Tales From Beyond’ sung in French, ‘St Matthieu’ features a brace of songs which thunder along, with furious riffs underpinning lush orchestration and Sonia’s vocals floating above the metal furore. The songs are cleverly written so as not to reveal themselves too early, and even the shorter material twists and turns like the Minotaur’s labyrinth. The highlight is undoubtedly the ten-minute title track, while ‘Chimaera’ is as close to a traditional neck-wrenching metal workout as you can get and the uncompromising ‘The Messenger’ features guest growls from Chris Neighbour, frontman from Weston-super-Mare’s face-shredding Four Way Kill.

Slimmed back to a four-piece once more – guitarist Rich Shillitoe had been recruited towards the end of the ‘Dark Waters’ sessions but left before work on ‘St Matthieu’ began – Mercury Rain completed the album in June 2004. The band were invited to open for Therion and Tristania on the French leg of their European tour later in the year, although, suffering from hearing damage, Andy was forced to bow out and a temporary replacement for the hugely successful tour was found in Rodrigo Oliviera from Brazilian band Korzus.

With their name spreading, and a clutch of great reviews for the latest album, Mercury Rain were also invited to play the third annual Metal Female Voices Festival in October 2005, the first UK act to grace the Belgian stage. For this show and the dates arranged around it Jon decided to radically re-arrange the band’s sound; given that the metal female voices genre was now awash with bands treading a similar path Jon decided to ditch the symphonic backing tracks the band used onstage and re-arrange the material for two guitarists. Still unable to recruit a suitable drummer, these gigs (which also included a slot at the UK Female Voices Of Metal festival) featured Claudio Diprima from Thy Majestie behind the drum kit.

Despite the success of the MFVF show in particular, Jon wasn’t happy with the new direction and, as the tour finished just as he was getting heavily involved in putting on the first ProgPower UK festival, he put Mercury Rain on hold. The band effectively split in January 2006.
But of course that’s not the end of the story. In 2008 Jon and Sonia met up with Rich Shillitoe once more and began writing material for a new album ‘Sands Of Time’. And although this never saw the light of day, and families, mortgages and sensible shoes took over from chord progressions and metric rhymes, the trio started working together again eight years later towards the end of 2016.

‘St Matthieu – Remastered & Reborn’ showcases the band at its finest. The compilation features the album in its entirety, augmented by three cuts from ‘Dark Waters’ (‘The City Of Ys’, ‘Bride Of the Dark’ and ‘The Boat Of The Dead’) and ‘Incubus’ and ‘Amber Reflections’ from the band’s extremely rare ‘Where Angels Fear’ debut. With all tracks recently remastered, a lengthy interview with Jon and Sonia and previously unpublished photos, ‘St Matthieu – Remastered & Reborn’ emphasises what an exciting and ground-breaking album this was for the UK metal female voices genre.
Sleeve notes and photos (c) John Tucker

Mercury Rain thank:
Claudio Diprima, Rodrigo Oliveira and Roy Chudobskyi for sharing the stage with us.
John Tucker, - our favourite music journalist with his bewildering knowledge of rock and metal and his literally boundless enthusiasm. Mike Darby and the team at Bristol Archive Records for putting this project together. All our families, friends, fans, journalists, promoters, and other bands we have played with over the years. Your support and indulgence is very much appreciated.