The Best Of Electric Guitars . re​-​Strung 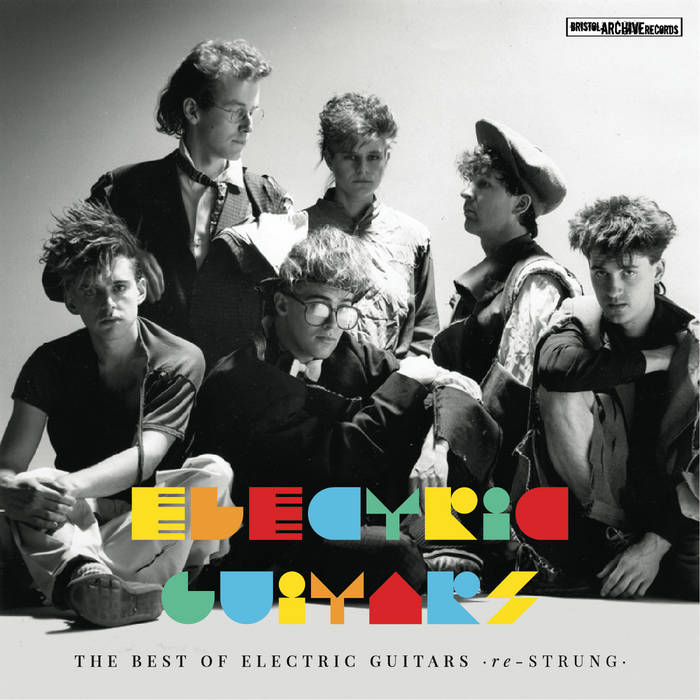 This is the early eighties at it’s very best, whether it’s called Post-Punk, New Wave or whatever the historians are calling the age in which we evolved the music. These boys took all the best bits of the freedom that punk provided and turned it into something accessible, something you could dance to or at least tap your foot to without being accused of mediocrity.

This album is the journey (in no specific order) through the EG’s development to their break up shortly after the release of ‘Wolfman Tap’, a catchy smooth production which led some reviewers to tag the EG’s funk. It's there, but it’s not alone, here is the diversity of sound that gave this era its reference.

So visualise while you listen, Matthew standing on his drum stool while delivering blows to a variety of misshapen objects. Novel then, much copied since. (Is that the drum stools irritating squeek at the end of ‘Interference’). Imagine or remember their pretty ridiculous outfits and hair in which termites could happily nest.

Dropouts from Bristol Polytechnic (or artists in pursuit or their dream) Neil Davenport (Vocals) and Richard Hall (Bass, Guitar, Vocals) together with Matthew Salt (Drums) paid rent for squat conditions in a shared house in Redland where they were joined by Dick Truscott (Keyboard, Guitar) and Andy Sanders (Guitar, Vocals) who had the sense to live elsewhere, Backing vocals were provided by Sarah and Wendy Partridge.

Here their first offerings to vinyl, ‘Dumb Words’,’ Le Camping’ and ‘Magic Surfaces’ were polished for the first Bristol Recorder, brainchild of Thomas Brooman CBE, he of Womad, among others.

‘Health’/ ’Continental Shelf’ was released as a single on Fried Egg Records and their second single ‘Work’, not written from experience, was a UK Indie chart hit on Recreational Records.
.
Signing to Stiff Records opened doors to Martin Rushents production, 7", 12" and EP delivered, covers designed by Peter Saville.They were the band most likely to!

Although never gaining mainstream fame, Electric Guitars deserve a chance to feature in modern playlists. Sandwich ‘Language Problems’ between Talking Heads and the B 52’s and you can't go wrong. Play ‘Work’ at a Zumba class and watch them fall like flies!

All songs written by: Electric Guitars

All other tracks previously unreleased

Seaweed and other pictures: Jo Swan, Garth O'Donnell (copyright remains on their work)

Thanks to everyone who loved us

Compiled and Edited by Steve Street

High resolution transfers by Adrian at The Great Bear and Richard Hall in New York, USA