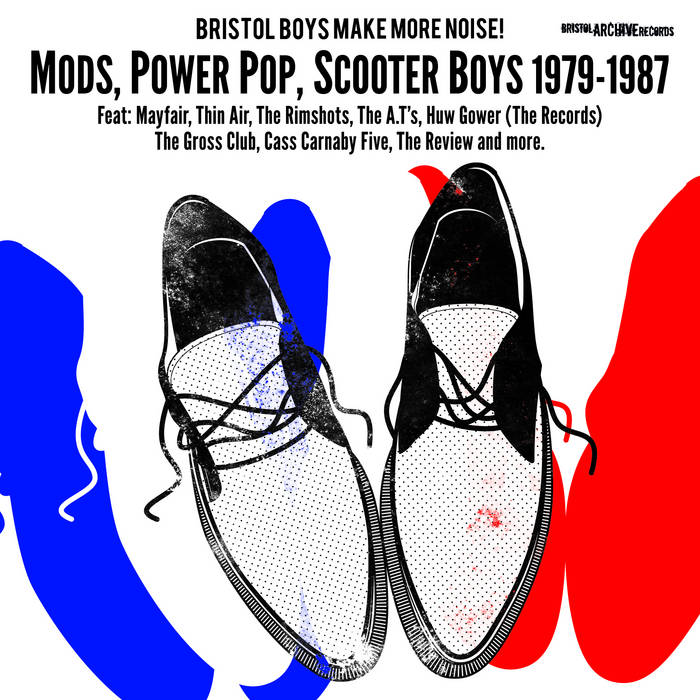 Bristol Archive Records have been telling the story of the incredibly diverse Bristol Music scene for several years now. The label has gained incredible success with their three previous releases ‘The Bristol Reggae Explosion’ series - Volume one, two and three covering 1978 to the end of the 80’s.

They followed the Reggae vibe with another critically acclaimed release, The Bristol Punk Explosion 1977-1983 which covered 1977 and The Cortinas through to Onslaught and the oncoming of Thrash Metal.

Now they turn their attention to another SUB CULTURE – Mods, Power Pop and Scooter Boys.

This album covers the period 1979 to 1987 and features 21 tracks. When punk rock started to fizzle out and Squat Punks started to appear on the streets, many of the UK’s disaffected youths had already moved sideways in Modernism and fell in love with bands like The Jam, Secret Affair and The Chords.

Mod was another gang culture, to some a way of life, to some it became life. The smart, striking fashion sense, the scooters, the music; (some from the 60’s, soul and motown), some from the 70’s and 80’s, guitar driven power pop. Wow, Mod was the real deal.

The West Country embraced the scene and produced its own Mod bands like Mayfair and The Newbeats. Other bands were in on the act but could be more appropriately described as Power Pop / Ska, namely The A.T’s from Bath, The Review from Clevedon and Sky High from Gloucester.

Success for some was supporting their heroes, a good example being Thin Air (previously called Out of Order) with their 14 year old guitarist and songwriter Paul Sandrone, who supported The Jam at The Locarno in 1980. Or The Rimshots, who played on the same bills as The Beat and The Bodysnatchers.

Most of the tracks on this album are previously unreleased or were issued on tiny runs of Limited 7” vinyl.

Some of our boys did make the grade though. Huw Gower with his band The Records, signing to Virgin in 1978 and had a number 56 Billboard Top 100 hit single with ‘Starry Eyes’, also playing on the same bills as the Jam. Huw recorded the track ‘She’s Still a Mystery immediately after he’d left The Records in 1981 with a big anthemic chorus, classic trademarks of The Who.

This album is a soundtrack to an era, remembering a period in time when Top of The Pops was full of Two Tone bands. Thatcherism was killing multi cultural Britain but to escape, it was ok to write a catchy pop song, it was ok to look smart and it was acceptable to wear a Parka (weirdly all the rage again now in the 2016).

The novel provisionally entitled ‘To Be Someone’ Bristol Mod 1979-1985 written by Michael W Salter will follow later in the year published by Bristol Archive Records and Tangent Books which tells the story of the Bristol Mod and Scooter Boy scene.

1. The A.T’s Too Young Girl
Written by The A.T’s, Recorded in 1980, Demo version (Copyright Control)

4. The Rimshots Little Boys and Little Girls
Written by The Rimshots, Recorded in 1981, Released on Spectro Records (Chrysalis Music)

6. The Various Artists Weekends
Written by JJ Key, Recorded in 1981, Released on their own label (Copyright Control)

9. The Rimshots I Was Wrong
Written by The Rimshots, Recorded in 1980, Released on Shoc Wave Records (Archive Publishing Ltd)

11. The Review Englands Glory
Written by Mike Eagle, Recorded in 1980, Released on All The Madmen Records (Copyright Control)

14. The Letters Nobody Loves Me
Written by Lodge, Recorded in 1980, Released on Heartbeat Records (Cherry Red Music)

All recordings licenced to Bristol Archive Records by the artists or the original labels
All Rights Reserved.