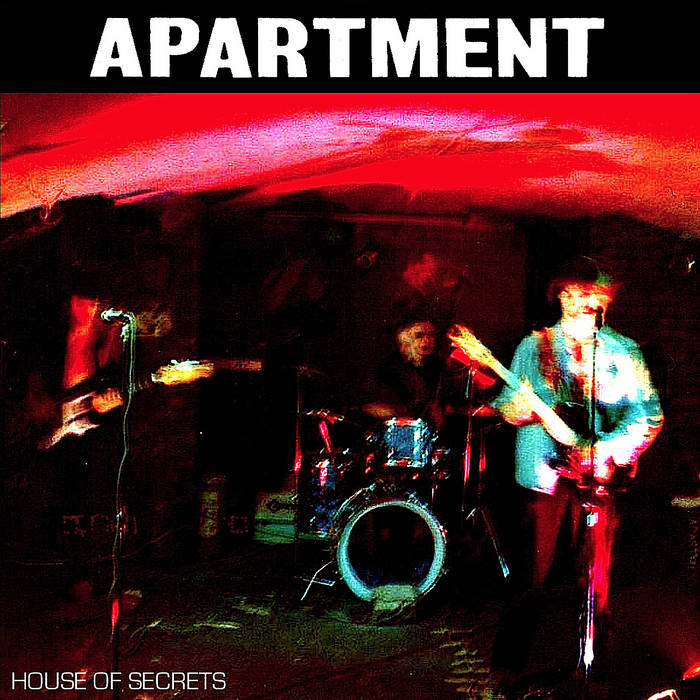 Aron Clark So god damn good - might have heard this first on Wassup Rocker Radio.

Whereas Bristol is all too often associated with the ‘’Bristol Sound’’ of Massive Attack, Portishead and Tricky, the city has produced musicians and bands who’s work goes way past that stereotype. With the release finally of Apartment’s ‘House of Secrets’ album, music lovers will hear a classic example of this for themselves. It is set ‘in’ the city, but is also very much ‘(a) part’ of it, because those on the outside of any charmed circle in a given place have to fight to get heard.
In the mid to late 1970’s the raucous and angry meets chorus strewn ‘new wave’ sounds of New York and punk driven London were also finding fertile soil in the west of England.

Part of that surge of the blast of youthful energy that shifted eardrums came from the more affluent Clifton west side area of the city, and to national attention, in the shape of The Cortinas and The Pop Group. But many others were writing, rehearsing and playing based in all 4 corners of Bristol. These included Glaxo Babies, Vice Squad and Essential Bop. All of these bands went on to achieve a respectable level of national recognition.

Hidden away right out in the suburbs of the eastern fringes of the metropolis, 3 young lads called APARTMENT were forging a truly international, post-punk variation of the classic guitar band trio. Guitarist / singer / songwriter, Alan Griffiths, drummer Emil, and bassist Richard White had a vision that was driven by their talent and ambition, and a burning desire to shatter the complacency of what was going on musically in Bristol and beyond.
Griffiths and Emil were inspired by seeing Television and Blondie on the same bill, utilising the artful angularity, chiarascuro guitar blendings and existential angst of the Verlaine / Lloyd axis, and the melodic twists and pop sensibility of La Harry’s quintet in their own soulful, sonic mayhem.

The spirit of CBGB’s had infused this band, like no other from the city of Bristol’s environs. In spite of the inevitable technical limitations of these home-recorded songs, enough of their power and passion shines from them and into the wonderful variety of songs.
The music sound-tracks a travelogue of themes, seasons and places, providing a perfect backdrop for the plentiful stories which were cascading from Alan’s imagination. The settings dramatically come over as often relentlessly urban, rammed full of atmosphere, self-doubt, pain, questioning and clarity.

Apartment’s star burned brightly for a relatively short period, but the band packed alot into their time together. They did a session for national radio in the UK, played shows in London at the legendary original site of the Marquee club, and along with releasing just the one single were also included on one of the seminal compilations of music from a city in the UK, ‘Avon Calling’, released on arguably the most important label at that time, Heartbeat Records.

One of the key people in developing Apartment’s early career was the label owner, Simon Edwards. His initial contact with the band’s music was, for him, highly memorable. “I distinctly remember receiving the Apartments’ original demo cassette – which I still have – and remember being immediately impressed by the songs and how well they were presented. They were almost good enough to use as they were. This wasn’t because of any amazing studio quality – I was later to learn they were recorded in Alan’s bedroom – but because they were delivered with such energy, innocence & a sense of urgency. They were SO alive. In fact, one of Apartments most endearing qualities to me was always their “on the edge” delivery – both in recorded work and live performance, the latter often being quite shambolic and in danger of literally falling apart. ‘’

Edwards’ own direct involvement came with the recording and release of a double-A side single, both tracks being included on ‘House of Secrets, along with a home recording on ‘Avon Calling’.
‘’Perhaps it was this single that told the bands story in one – front man Alan Griffiths with the ability to write really great yet very diverse songs and deliver them like it was the first and only time he would ever get to sing them. Was it all this emotion and angst that just became too much to control?”

‘House of Secrets’ collects that blend of organised chaos in all of its glory from a heady time in Bristol music, and all over the UK at the time. Open the door and walk on in.

All songs written by Alan Griffiths
except 'The Car' & 'Broken Glass' written by A.Griffiths, E.Joachim, R.White

All songs Copyright Control-PRS.
except 'The Alternative' published by Kassner Associated Publishers Ltd.

This album is dedicated to ‘The Dark Side Of Bristol’
Mike Darby, Bristol Archive Records (Bristol Boys Make More Noise)