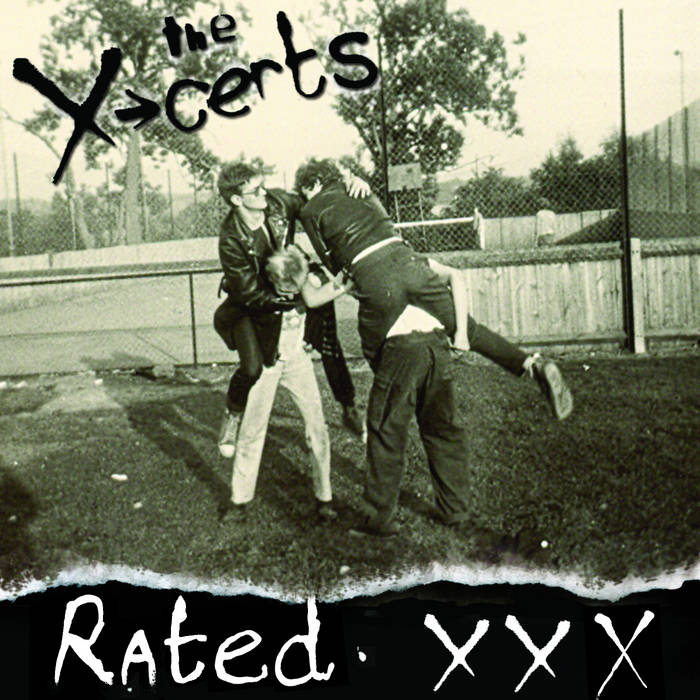 As 1978 wore on, we thanked God for the likes of UK Subs and Angelic Upstarts, and here in Brizzle...the mighty X-Certs! With Clive Arnold (vocals and guitar), Simon Justice (guitar), Taf (bass) and Neil Mackie (drums), The X-Certs served up welcome blasts of Clash-style punk anthems. They were politically charged and passionate, friendly and down to earth, and a great live act, but for some reason their recordings were relatively few and far between. One track, Blue Movies, on Hearbeat Records' 4-Alternatives EP, and another called Anthem on the same label's acclaimed Avon Calling compilation album. And that's yer lot with the original line up.

Live, though, they were real contenders, pulling as many as 500 people into Trinity Church before they even had a record out, and supporting the likes of the afore-mentioned Angelic Upstarts, Pere Ubu, Misty In Roots, The Only Ones, and most famously, The Clash, at Sophia Gardens, Cardiff, on 11 February 1980, on the 16 Tons Tour, with none other than Topper Headon mixing their sound.

By the Clash gig the line-up had changed and so had the band's style, exploring new musical territories including reggae, but this album captures the original four-piece at the peak of their Punk Rock powers.

All other tracks either recorded at GBH Studios, Bristol in 1978/79 or Drone Studios in Manchester 1978. The Bristol tracks were engineered and produced by Steve Street.

In late 1978, and on into 1979, many young punks who had been buying the records and going to the gigs, but had been that little bit too young to get involved with 1977 Punk, began forming their own bands. Many of the originals had either split or changed their style, and the punk that was to come would evolve its own range of styles, but at that point, those that baulked at cleaned-up New Wave and arty Post-Punk looked to the likes of the Ruts, Angelic Upstarts and UK Subs for inspiration, regardless of the NME's sneers.

Yer in Bristol, our main inspiration was the mighty X-Certs.

They were obviously very influenced by Punk but were also very obviously Bristol lads – Clive's singing voice was always pure Barton Hill, never London or LA. To those of us just starting out, it was an eye-opener to see the band pulling 500 people into Trinity Church before they even had a record out. We could do this...well, we could if we worked bloody hard to try and be as good as them. And, yes, they were all very nice, approachable, down to earth blokes.

For me, as a fan, my big regret was that The X-Certs didn't get to release Fight Back and City Claustrophobia as a single when The Ruts and Angelic Upstarts were putting out their first records. They were just as good.