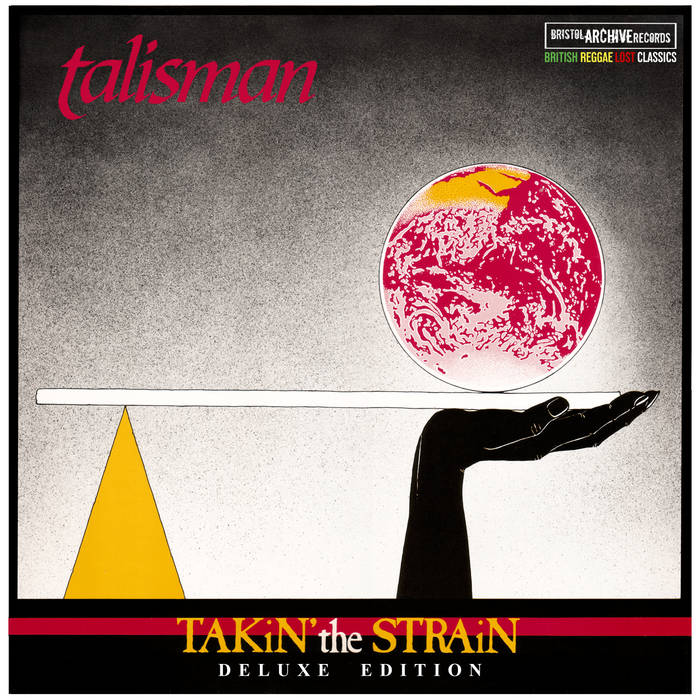 Originally issued as a vinyl LP in 1984, “Takin’ The Strain” was Talisman's first album. The culmination of a long musical journey as the band had existed in various guises since 1976. At the time of the album’s release Talisman were a three piece. This core of Desmond Taylor, (Dehvan Othieno Sengor), Dennison Joseph and Donald de Cordova were supplemented for the recordings by a host of local musicians as well as the engineering and co-production talents of Richard Lewis (UK Scientist), a mainstay of the British reggae scene.
Although they'd been through personnel changes, this line-up were consummate performers and delivered a musical statement for the time. The nine tracks showcasing some variety and even including a soul tune.
Having been launched to great fanfare with a live show at The Bristol Studio, then the city's premier live music venue, the album achieved some success. It also suffered from being released on a small independent label without the muscle to break through to a wider audience.
Having already released Talisman's earlier recorded output on “Dole Age - The 1981 Reggae Collection”, (ARC199), it's only fitting that Bristol Archive Records should turn their attention to the band's first studio album. Not only is this the first digital issue, available on both CD and download, but this release is enhanced by the addition of five live cuts recorded at London's Lyceum in 1985. As well as live performances of “Takin’ The Strain”, “Calamity”, “Ah Wah You Seh” and “Lick & Run” we've also included a live version of “Slow Poison”, a track that didn't make it onto the original issue, but was a key part of the band's live sets for many years.
In addition to the extra tracks Bristol Archive's usual attention to detail is evident and the CD comes with a booklet full of archive images and extensive sleeve notes based on the recollections of Lead Vocalist and Guitarist Dehvan Othieno Sengor.
Coinciding with a renewed appreciation for their work Talisman have reformed and are now playing gigs throughout the UK, rebuilding the loyal following they once had and winning over a whole new generation of new fans, many of whom weren't born when “Takin’ The Strain” was first released.

Tracks 1 to 9 mastered by Shaun Joseph at Optimum, Bristol 2010

This album is dedicated to St.Pauls Carnival, Bristol, UK

Photo Credits: Thanks to the original photographers and artwork designers with whom copyright remains on their work