Pride Before A Fall - (The Lost Album) 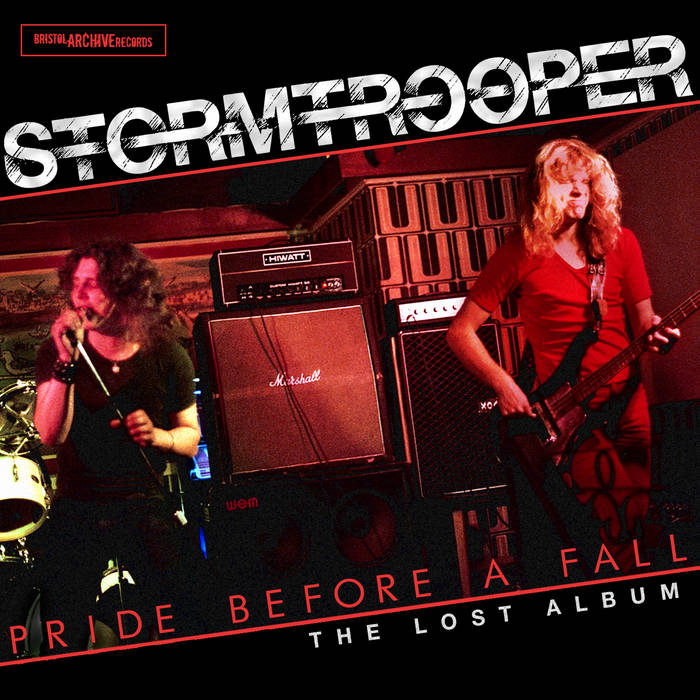 Fernando Benítez people are missing out on this one... very very very good, gritty yet smart authentic nwobhm.. i mean, it should be selling thousands of copies, no shit. if you dig 70s rush, montrose, budgie, riot, priest, uli-era scorps, legs diamond, motorhead, the pink fairies, kiss, tygers of pantang, angel witch, cirith ungol, the 1st def lep album, sabotage-era sabbath, thin lizzy, even bloody eloy, the damned or ramones, just what the fuck are you waiting for? perfect in every sense.

Emperor of the Underground of Doom..

Cast your mind back to a time when new music was coming at the public in ‘waves’. First there was the ‘new wave’ of punk rock. Then 1979 and into the early 1980’s, taking its’ cue from those shorter haired thrashings, the then mighty music press in the form of Sounds came up with the laborious name of the ‘New Wave Of British Heavy Metal’ for the deluge of new rock bands that were emerging from all over the country.

In a story that is little appreciated, bar amongst the bands’ fiercest fans, Bristol’s very own Stormtrooper were ahead of the ‘N.W.O.B.H.M’, as they had originally formed in the mid 1970’s. But they were right in there more than holding their own with the likes of Def Leppard, Iron Maiden, Saxon and Motorhead in terms of seeing their music released in the slip-stream of that catch-all ‘brand identity’.

Bristol as a city has no claim to being a rock stronghold, but the band didn’t let that hold their campaign back. Their passion, talent and ambition enabled them to launch themselves to gain recognition, and their hard work and blistering live shows paid off when ‘Pride Before A Fall’ became one of the singles released through the unlikely means of local Heartbeat Records operation, run by Simon Edwards in Bristol.
‘Pride’ roared its’ way into the ‘Heavy Metal’ chart at 23 in Sounds in its’ first week of release. It reached the heady heights of number 11 after. But unfortunately that was as far as it got in terms of national recognition of the bands’ releases.

Now the other recordings made by the band in that era, including at the now sadly lost Crescent studios in Bath, as well as in their home city, are available on the ‘Pride Before A Fall – The Lost Album’ album, released on Bristol Archive Records. Songs like ‘In The State In the City’ and ‘Still Coming Home’ showcase the bands’ unique blend of Bob Starling’s distinctive and passionate blazing guitar attack, with the driving force of an electrifying rhythm section.

Nick Hancox’s technically brilliant and energetic drumming fused with Colin ‘Boggy’ Bond’s knock down the walls bass playing, and his definitive use of Moog bass pedals which brought another dimension to the textures in the music. In the best traditions of a great rock band, this was topped by the rock power and vocal range of singer, Paul Merrell.

The full-on epic ‘Battle of the Eve’ – recorded ‘live’ in the studio in one take like the other songs on ‘Pride’ - took the band into more ‘Prog’ territory, with the use of basic Moog synthesisers and various effects adding extra colour.

You can hear on this album how the band wore their collective influences – centring on Led Zeppelin and Rush - on their musical sleeve, whether it was hard rock, intricate ‘Prog’, blues or plain kick out the jams slamdunk riffing. Their sheer vim and punk-infused enthusiasm, combined with a strong collective control, gave them a sound that was very much their own.

In spite of the minimal time spent on it in the studio, ‘Pride’ as an album bristles with high level musicianship that transcends any production limitations. This is a band recorded in the raw, and the music tells it like it is, with no frills yet has plenty of depth. It’s music that HAS to be listened to.

The album shows the undoubted potential in a band that with the right management, combined with that bit of luck that every act needs in their career, should have been serious contenders to make an international breakthrough, as Leppard and Maiden did. But that’s the rock and roll dream, and they certainly lived it.

They ‘got away’ from their backgrounds from the meaner streets of south Bristol – and there are plenty of those all over the city – while doing their best to reach out to a wider audience. It takes a lot to get out of what could be seen as ‘the Bristol attitude’, but once the band split Colin Bond also had his own wide ranging career after he’d left as a member of Stampede, touring with Meatloaf and playing on 14 different albums . His brilliant sleeve notes to the album convey this and his story wonderfully.

Now it’s time for Stormtroopers’ brand of crafted musicianship, high-octane, no holds barred passionate rock thrill to get its’ official album release, and the wider recognition that will inevitably go with it. This album is an explosive listen, with depth, intensity, heart and graft written right into it. It’s a lost gem that’s rock gold and is worthy of being in any genuine rock fans music collection. Feast your ears on it!

Thanks go to:
Nigel Lloyd and Frank Powell who will always be part of Stormtrooper and 'Gus' for his short lived but productive drumming skills. Stephen 'Squib' Webb for deciding to play drums instead of Bass! 'Nervous System' for giving us a leg up. Al Reed from the 'Granary Club', for giving us the opportunity of realising our first goal. Simon Edwards from Heartbeat Records for being brave enough to go against the grain and release our first single. Brian Coombs from 'Bristol Musical' the centre of the universe in the 70’s. Our wives and girlfriends Julia (thanks for buying the Taurus), Karen, Sally, Sandie, Jo and the rest! Richard Harris for the down payment on my Rickenbacker. Mike Darby, Steve Street, Dave Massey and anybody who helped in any small way to make our six year journey a little more comfortable and enjoyable.

Photography Credits:
Julia Bond, Karen Starling, Stormtrooper and anybody else we could trust with our camera's.